Back in the 1950s manganese was being mined at Woody Woody in the Pilbara. The ore needed to be transported to the coast in the days before railways. The trucks used to transport the heavy suffered on the rough roads. The mine was being operated by Don Rhodes and one of his engineers Harold Ridley, suggested building a truck strong enough to do the job.

Ridley and a team in Welshpool built what became known as the Rhodes-Ridley truck. Two ex-WW2 American tank engines were used to power the truck. The truck was designed to carry 100 tons of ore. It was constructed so big that a man could stand up in the cab. Once completed it was tested by driving it up the scarp along Kalamunda Road; it did well. The major snag; WA police condemned the truck and would not allow it on public roads. It did one trip to the Pilbara loaded with equipment and thereafter was used to cart generators around the mine site. Eventually it fell into disrepair and was abandoned at the mine.

From 1972 to 1989 the remains of the truck were stored in Boyup Brook. In recent years former staff at the mine decided to restore the truck to its original condition. This was done with the financial assistance of Ken Rhodes. Later, a book was written showing the various stages of reconditioning. 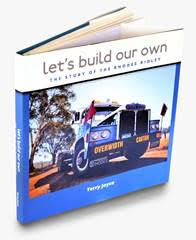 The book “Let’s build our own”

The truck is now in Boyup Brook and the owners are considering displaying it at a heritage park in Dardanup or possibly Whiteman Park in Perth. 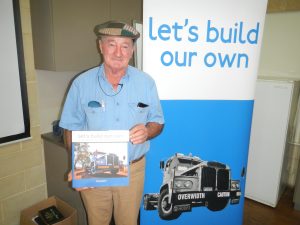 Terry Joyce with the book “Let’s build our own”