Little Islands (2)
On Thursday 16th May, Sheila Twine gave a presentation to 30 U3A members and guests. This was NOT a travelogue, but about Islands which had a significant story to tell.
She started by regaling the audience of the plight of Venice, which is now sinking with the weight of buildings, on a cluster of over 100 tiny islands. Sea level rise is compounding the problem with frequent flooding and eroding of its foundations of thousands of oak and larch poles deep in the mud in the lagoon. Excessive tourism is further adding to problems with many Venetians moving away. Sheila also showed a video clip detailing the MOSE system of raised barricades to prevent flood waters entering the city where tourists and grand pianos are so often fitted with sea boots!!
Venice cultural aspect was demonstrated with David Smeeton, dressed as Shylock, reading from Shakespeare’s Merchant of Venice. 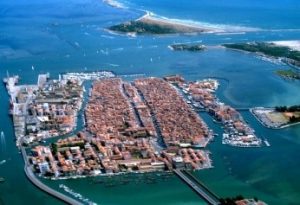 Venice
Croatia. Sheila then took us down the Adriatic to the islands dotting the shores of Croatia from Split, where Roman Emperor Diocletian built his palace. Dubrovnik with its many Roman fortifications and of the recent devastation and bombing of the ancient city in the Homelands War in 1991 when Serbia and other Balkan countries invaded Croatia until the UN stepped in to stop the hostilities.
Spinalonga, the tiny island off Crete was the next port of call. Christine Bunny, gave an emotional reading about this Greek leper colony which isolated people with this dreaded disease for over 50 years till a cure was found in 1957. She read from Victoria Hislop’s best selling historical novel, “The Island”. Thank you Christine for taking part so early in her membership.

Croatia
Channel Islands. We then whizzed over to the English Channel to Guernsey and Sark. Both were occupied by German troops during WW2, with gun emplacements and Martello Towers dotting the coastline. Sheila told us of the redoubtable Dame of Sark who was a feisty opponent for German officers. She also described the unique dwelling of Victor Hugo on Guernsey with collections of dinner plates and soup tureen lids decorating his ceilings, whilst he wrote his famous ‘Les Misérables’.

The Channel Islands
Isle of Wight. Our last trip was round the Solent waterway aboard a ‘Flying 15’ with Prince Phillip and Uffa Fox as crew. Sheila showed us Queen Victoria’s residence at Osbourne House and told us about many of the famous who wrote, composed or painted on this favourite British island. 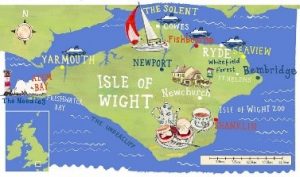 The Isle of Wight
So much more to look up and find out about all these Little Islands. Thank you Sheila. 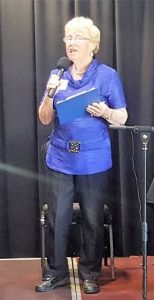