On Thursday 28 March, Dr Sheila Twine told us that Pablo Picasso was born in Malaga, Spain on 15 October 1881. His name was actually Pablo Ruiz – taken from his father’s name – but took his mother’s name and was known as Picasso.
He was a disruptive student and regularly banished from the classroom, and constantly drew his surroundings.
His early drawings were of people and he showed great talent when very young.
His blue period was in 1901 and he painted with a limited palette.
He produced sculptures, but in 1909 he painted Demoiselle d’Avignon which was very different from that which had gone before. He was 28 years of age. The critics were unsure of the meaning of the painting.
Then came his Cubism and Abstracts which were more and more complicated, followed by collages.
Picasso loved all things cultural.
He loved a number of women one of whom was Olga, a Russian ballerina. They married in 1918 and had a son together.
Picasso worked with Diaghilev and painted sets for the Ballet Russes.
Each new relationship brought bursts of artistic energy.
In 1936 he was appointed Curator of the Prado Museum in Spain.
During the Spanish Civil War in 1936 Picasso sold some of his painting to fund refugees.
Bombing destroyed a little town in northern Spain called Guernica in 1937. It was the first time civilians had been bombed and it occurred on a market day when crowds were in the market square. Guernica was flattened apart from one house and a church.
He was invited to exhibit in the International Exhibition in Paris and while awaiting the raw canvas (20 feet long) on which to paint The Guernica, he did a number of sketches based on the bombed town.
His painting, The Guernica, is now displayed in the Reina Sophia Gallery in Madrid.

All through World War 2 he stayed in Paris although he was an alien.
Picasso and the painter, Matisse, decided to put their paintings underground to save them from the Germans and swapped the names of the artists on the paintings so that if the painting were discovered they would be valueless.
He did not return to Spain and joined the Communist Party.
Picasso died in 1973 aged 91.
Because he had one legitimate child and three illegitimate children, he was concerned that the law regarding inheritance in France did not recognise children born outside of marriage.
In 1972 the Filiation Law was introduced but not enacted until 1975, after Picasso’s death. The revised Filiation Law did allow his 4 children to inherit.
In 1975 the Spanish monarchy was restored, one year after the death of Franco. 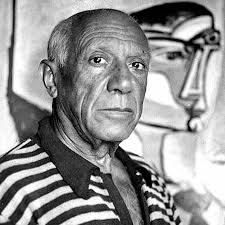