By 1942, the war had been reasonably successful for Britain with the aid of its Allies but no major victories had been recorded. The Japanese attack on Pearl Harbour changed all that. America declared war on Japan and Hitler responded by declaring war on America. During an address to the US Congress Churchill said, “What kind of people do they think we are?” Reportedly his speech ended in wild cheering and waving. Soon after, Churchill suffered a mild heart attack but decided to keep it quiet. 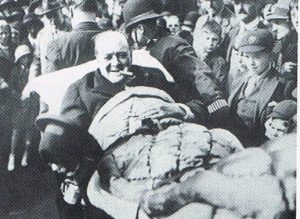 The North African campaign was won at El Alamein. Churchill claimed it to be the, “End of the beginning”. The war swung to Italy and Mussolini surrendered in 1943. Churchill was initially concerned about the D-Day strategy but he, “Warmed to it”. Four thousand boats crossed the channel resulting in Victory in Europe (VE day). Soon after the war Churchill was voted out of office by British public. By 1951 he was back for his second term as Prime Minister. He had earlier refused a Dukedom but was knighted in 1953. He later received a Nobel Prize for literature. He retired in 1955 and spent most of his remaining years at Chartwell. He kept in touch with world affairs and was concerned about the spread of Communism. He died in 1965. 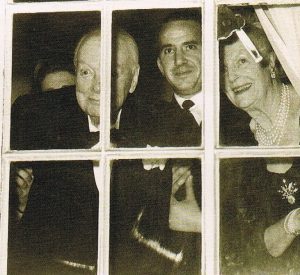 Churchill just before he died

Peter also commented on Churchill’s relationship with Australia. His involvement over Gallipoli and his confrontations with Australian Prime Minister Curtin over demands for Australian troops to return and defend Australia against Japanese aggression did not endear him to Australians. Peter explained that Churchill always put Britain and England ‘first’ and expected the Empire to do its duty to them. Today, Churchill Fellowships are still presented to keep close relationships between Australia and Britain. 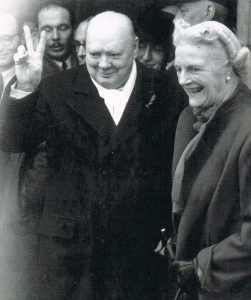