Science on Wednesday 1 November saw us being educated and entertained on a variety of scientific topics that have absorbed scientists recently.

There were four main headings to Roy Done’s presentation:

Stars colliding, a visitor from another galaxy and a prediction for the end of the world by Christmas this year. Travellers across the Pacific thanks to a disaster and the human’s love of plastic. A three-way “action” to make a baby! The cunning ways of mosquitos and other such creatures.

Roy started his talk by reminding us that the first “test tube” baby, Louise Brown was “conceived” 40 years ago on 2 November. Since then IVF techniques have changed dramatically.

He then proceeded tell us about the recent excitement in scientific circles over the collision of two neutron stars 27million light years ago, that were observed on earth recently, and how such stars come into being, and collide. The result is a gravity wave, which Einstein predicted 100 years ago, although he also predicted that man would never be able to “see” them, which prediction is untrue.   Among other telescopes that viewed the gravity wave, was the Zadko telescope at Gingin in WA. 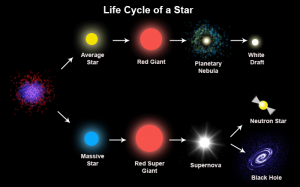 Roy also explained that the collision of the two neutron stars was hard enough to “make” gold, 27million light years ago; thus the gold now being taken from the Kalgoorlie gold fields was probably created that long ago.

The disaster referred to was the earthquake in 2011 just off the coast of the main Japanese island. Among other resulting disasters was the breakdown of the Fukushima nuclear plant; the resulting tsunami generated waves over 100 feet high, shifted the island by 2.4 metres, and sent a great deal of large rubbish out to sea, such as TVs which washed up on the shores of the USA.

Also appearing on the American shores were over 200 species of fauna never seen before, that came attached to the plastic, polystyrene and fibreglass rubbish that washed up. Roy pointed out that in the past, in such an occurrence, the rubbish would have been wood and other degradable material, which would have disintegrated long before it reached a shoreline, so these fauna would never have been seen. However, plastic, polystyrene and fibreglass rubbish doesn’t degrade!

After the tea break, Roy moved onto genetic engineering, and DNA.  He described the mechanism by which the DNA from three people, two women and one man, can be used in IVF to make an embryo free from an otherwise unavoidable disability.

We then heard about scorpions that fluoresce under UV light, making them easy to see; also rocks that fluoresce, showing in wonderful different colours their constituent particles.

We also discovered that scientists have actually devoted resources to establishing why we don’t feel the mosquito taking off after it has bitten us – Roy hoped this was NOT going to get a Nobel prize and we agreed with him. Of more importance was the research into why so many insects are disappearing, as their disappearance has an impact on our lives.

Finally we heard about the mathematician who predicted that the world would end on 22 September 2017. Since it obviously didn’t he has revised his prediction to 22 December this year. However, this is probably not a good excuse not to buy any Christmas gifts!

All in all an excellent and informative session that sent us away with our brains reeling somewhat. Thank you, Roy. 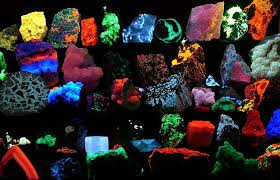 The beautiful colours in fluorescent rocks