The Amber Room in St. Petersburg was considered to be the 8th Wonder of the World. The original Amber Room was created by Prince Frederick of Prussia for his wife Princess Sophie in the Charlottenburg Palace in Berlin. It comprised huge panels weighing approximately 6 tons. 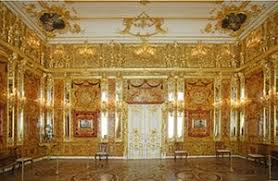 Their son, Frederick William 1 of Prussia gave the Amber Room to Peter the Great of Russia and it was shipped to St. Petersburg and reassembled. It was later moved again to Catherine Palace by Catherine the Great.

During World War Two, the German Army removed the Amber Room and took it back to Germany where it was taken to the Konigsberg Castle. From there it disappeared. It may have been destroyed by Allied bombing later in the war or hidden successfully.

In 1979 the Soviets commenced the reconstructed the Amber Room in St. Petersburg at a cost of $500 million. It took 24 years to complete. 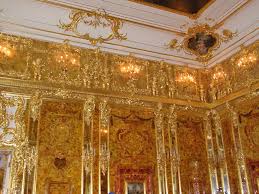