On Tuesday 24 October 2017 at the General Meeting, we heard an excellent talk by Adrian Lambourne, ex RAF Pilot, and ex Ansett captain, about the ONE Vulcan that the RAF sent to Port Stanley in the Falklands, to disable the airport during the Falklands War in 1982. 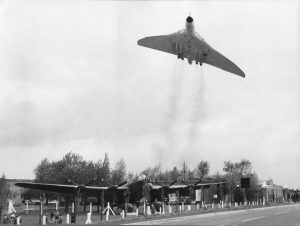 A Vulcan over the Lancaster at the gate of RAF Scampton

The objective was to disable the Port Stanley airport by bombing the runway, to prevent the Argentinians using it, NOT to bomb the town of Port Stanley or injure civilians.

The date for this mission was to be 30 April 1982, and the mission was known as Operation Black Buck.

Adrian’s talk was well illustrated with video clips of the story of how the Vulcan and its crew got there. The Vulcan was a 1960s-era bomber, and required some modifications before it could be used for this mission. We saw how the RAF had to search for the required parts, one of which was found being used in a Mess as an ashtray!

We also heard and saw how mid-air refuelling of the Vulcan would be required as the last possible fuel available on the flight from the UK to the Falklands would be at Ascension Island, which is about 4000 miles or 3500 nautical miles from Port Stanley, a return flight of about 7000 nautical miles, or more than twice the range of a Vulcan.

Inflight refuelling had to be learned and practised, for which the crew had two weeks to learn something that would normally have required several months. Eleven air tankers (Victors) were required to refuel one Vulcan for this flight, as the Victors had also to refuel themselves on the flight.

We also saw how the crew practised for the mission by dropping bombs on Garvie Island, an uninhabited island off the coast of Scotland; the Royal Society for the Protection of Birds had a problem with this, though no-one else did.

Having successfully completed the mission by damaging the runway at Port Stanley, on the return flight to Ascension Island the Vulcan crew could not find their Victor refuelling tanker until almost the last minute, when she was suddenly in view. The refuelling was successful and the Vulcan returned safely to Ascension Island, to the sounds of the theme from Chariots of Fire.

An excellent talk enjoyed by all and we look forward to the next one. 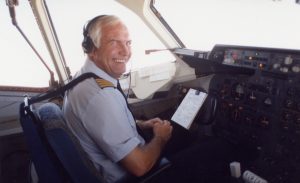