Pirates, it seems did not go about saying ‘aargh Jim Lad’’ all the time. In David Smeeton’s recent pictorially colourful presentation on the robbers of the sea (17 October 2017) it emerged that many, including men like Francis Drake sailed under Letters of Marque from their sovereigns giving them permission to act like pirates in the interests of the state, with English ’sea dog’ privateers capturing Spanish treasure galleons.

It was a system that gave rise to Royal Navies, and the acquisition of territory, as most privateers or pirates also created fortified lairs, particularly in the Caribbean.  And the presentation introduced many a noted pirate.

Blackbeard tied hemp in his beard and set it alight whenever boarding ships. Jack Rackham had two female pirates aboard his ship – Anne Bonny and Mary Read. 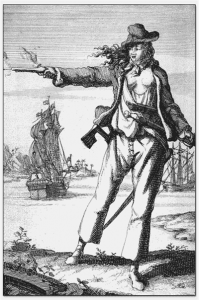 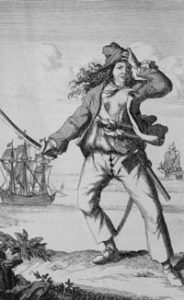 Intriguingly the first record of pirate activity can be found in the tomb of Rameses III in the Valley of the Kings in Egypt, where a wall is carved with a picture of the King and his sons repelling the Sea Peoples – pirates who were the fore-runners of the Phoenicians.

It turns out that perhaps the most aggressive pirates were the Vikings who raided Britain and took hostages as serfs when sailing down most of the main rivers of Europe. Later much of the slave trade in the 16th to 19th centuries  was carried on by pirates.

A lively afternoon with David Smeeton and Geoff Roberts entering into the spirit of the occasion by dressing up in pirate costume.  But then they both come from Plymouth in the UK – the home port of Francis Drake. 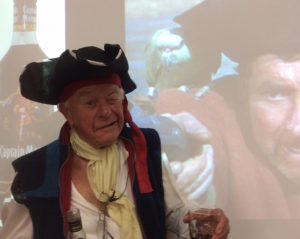