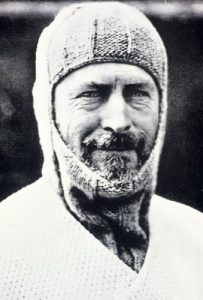 On Wednesday Oct. 11, Rory O’Brien presented  Sir Douglas Mawson’s Australian Antarctic Expedition.  More than thirty members enjoyed his well-researched talk that began with an overview  and timeline of all polar attempts since the 19th century.

Born in Yorkshire England, Mawson grew up in Sydney where he gained his Bachelor of Engineering at 20 years of age. After finding a keen interest in geology and working in Vanuatu, he joined Shackleton’s Nimrod expedition to Antarctica from 1907—1909. ‘

Then in 1911 Mawson launched his own Australian Antarctic Expedition to that section of land directly south of our Continent. His ship SY Aurora arrived on Jan. 12, 1912. A main base was set up at Cape Denison from where several parties carried out survey and research work. The weather was extreme with 320 km/ hour  winds and blizzard conditions.

Mawson with two companions Mertz and Innis, striking out eastwards with supplies on dog-drawn sleds to survey King George V Land soon ran into trouble. Ninnis with several dogs, fell into a deep crevasse and perished.

After Mertz died Mawson was lucky to survive when his sled jammed over another deep crevice in the ice leaving him dangling on a harness.

Returning to Australia to marriage, family life and a distinguished career at the University of Adelaide, this great trailblazer lived to the estimable age of seventy. 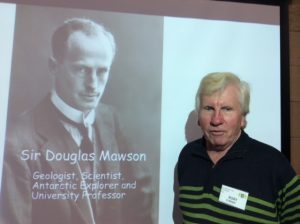