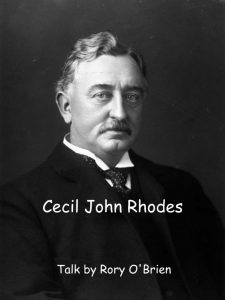 Cecil John Rhodes was born in 1853 in Hertfordshire, England, the son of an Anglican vicar. He was a sickly child and at age 17 he was sent to live with his brother in the British Colony of Natal, South Africa. His brother’s farming interests were unsuccessful and they both moved to the Kimberley diamond fields. Rhodes worked his brother’s claims and gradually bought up diamond leases. Within 20 years, with the help of African labour, he had a virtual domination of the world diamond market. With ready cash he invested in land and other farming businesses.

He entered politics and in 1890 was elected Prime Minister of the Cape Colony. His time there was noted for poor opinion of the indigenous African population and his moves to deprive them of land and force them into labour. He also clashed with the leaders of the Transvaal Republic and engineered the Jameson Raid, which failed. As a result he resigned as Prime Minister.

He wanted to promote British settlement from the Cape to Cairo, across Africa. He obtained concessions to mine and occupy lands from the Limpopo River to the central African lakes thus adding to his vast wealth. He was also keen to further his education and attended Oxford University but poor health drove him back to drier climates.

He was in Kimberley during the Anglo Boer War and helped defend the city. With declining health he returned to Cape Town and died in 1902 at the age of 49, one of the wealthiest men in the world. He was buried in the Matopos Hills, in Rhodesia, now Zimbabwe. Some his ideas on racial matters have made him out to be a villain but many consider that he did more good than bad.