Part of the Bayeux Tapestry illustrating the Battle of Hastings

A full house of members and Guests enjoyed a PowerPoint presentation tattoo by Jock Fyfe and Sheila Twine on Thursday 20th October 2016.  Jock explained the complicated Anglo-Saxon, Norwegian and Danish claims to the English throne over a hundred years prior to 1066.  He then flagged the claims that William, Duke of Normandy, claimed through Emma of Normandy who had been married to two of the Saxon Kings.  Emma’s children also ruled as kings over the land prior to the decisive Battle of 1066.  Jock showed a video clip of the Battle of Hastings.

Sheila then took up the story and showed attendees the replica of part of the Bayeux Tapestries, from where we get much of our knowledge of the battle and the precursors to the historic landing of the Normans at Pevensey in October 1066.

Sheila showed how the land we know as England changed for ever after the Battle of Hastings when William defeated Harold II, 950 years ago.  Land holdings and social orders changed, religions and language altered, customs and traditions were upset and irrevocably remodelled.  She showed the ruins of ‘Battle Abbey’ which was built by William the Conqueror and has now grown into the substantial town of Battle with its tourist industry of viewing the ruins and battlefield.  She then showed paintings of the Domesday Book 1087, which listed landholdings and was a detailed inventory of stock and chattels.  As there was no appeal against these inventories, the term Domesday rang true. 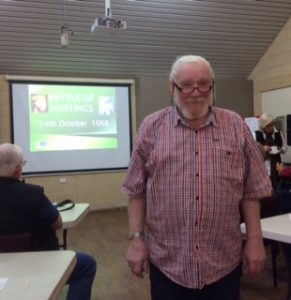 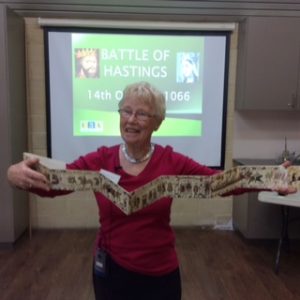