Joan Robinson organised a day out for members to visit the Black Swan Prize
for Portraiture Exhibition at the WA Art Gallery on Wednesday 26th October
2016.
A small group of us set off on the 9.12am train from Mandurah and were
welcomed at the Art Gallery by the guide Joan had organised for us.
Alice, our volunteer guide, took us around the Gallery’s portrait collection
explaining and pointing out features of various portraits and artists.
We then spent over an hour enjoying viewing the forty Black Swan Prize
portraits selected as a shortlist out of the entries which numbered 484. The
Black Swan Prize for Portraiture celebrates its tenth anniversary this year
and constitutes the third largest prize money pool for portraiture in
Australia.
The people’s choice award was announced that afternoon and went to artist
Tom Macbeth for his portrait of Syd Kirby MBE. The overall winner of the
major prize was awarded to Rachel Coad for her portrait of Waldemar Kolbusz,
a well–known WA artist born in Perth of Polish parents.
Thank you Joan for arranging this stimulating outing for members. 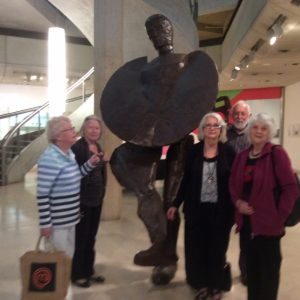