A full house greeted Joan for her very first presentation.

She spoke about her father’s lucky escape being saved from the sunk HMS Valerian. She continued telling us about her experience of being evacuated from Portsmouth to the small village of Eastleigh with the Shearing family.   Her father was then killed when his next ship was torpedoed. A traumatic event all too common to British families.

Schooling renewed when Eastleigh Primary was reopened, with gas masks and instruction about how to lie low by walls on roads when Doodle Bugs or planes were around.  Her experiences of siren suits, sleeping in bomb shelters and seeing the glows in the night sky as her home town of Portsmouth was ablaze, set her audience in remembrance mood. Her showing of documents from the Ministry of Health in Whitehall, plus log books and ration books rounded out her lecture.

Many members then shared their memories of living in Britain through the bombing and rationing of the war years. Interaction was high as members related stories of lucky escapes, flags flying as Japan was defeated, families reunited, continuing rationing, and the huge task of rebuilding bombed cities.

Joan engrossed us in her passionate and personal view of 1939 to 1945.  A big THANK YOU to Joan Hayes. We look forward to your next presentation. 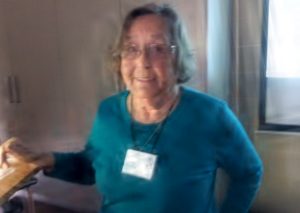