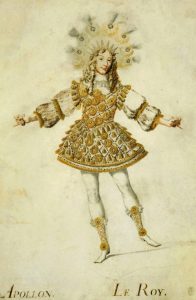 Jo Kreibich started with an eye opener.  Ballet started with a French King, Henry III, dancing around in tights in a 1581 Royal Court production of the ‘Ballet Comique de la Reine’.  Ballet never looked back from then on.  Down south in Italy in the Renaissance the Medicis – a ruling family who knew a thing or two about culture and diplomacy, started putting on ballets that merged poetry with set design and artistic footsteps to entertain visiting envoys.

It fell to Louis XIV, the Sun King in France, to take up the artistic challenge by founding the Paris Opera, and encouraging dancing as well as singing on stage, while in his Court he waltzed about in orange tights to embellish his Roi de Soleil image. Ballet had arrived.

However, by the 1830s merriment in dancing had given way to ‘Serious Art Form’ and Ballet with music and dance properly integrated; though women were still playing the men’s roles.

All that changed with the arrival in the late 19th century of the Ballet Kiev in Russia, and later the Ballet Russe in Paris, with the exiled impresario Daghilev, putting ballet well and truly on the international art circuit with a revolution in advent garde productions using the music of composers such as Debussy and his ‘L’Apres Midi d’un Faune’, and Stravinski’s ‘Rite of Spring’.

Ballet had now captured the interest of a wide audience through the incredible balletic leaping of male dancers such as Nijinsky, and with the arrival of the corps de ballet parading in tutus, and the beautiful dancing of the ballerinas Taglioni, Pavlova and Fonteyn.

Now ballet is a world cultural entertainment in almost all major cities with audiences enraptured with Dying Swans, frightened by the Willies, and entranced by the new interpretations and modern dance productions that emerged with modern choreographer Balanchine opening ballet schools in Chicago and New York.

The presentation provided a detailed account of the history of the ballet, tripping the light fantastic from 16th century regal farce to today’s elegant flowing pas de deux, and dramatic physical movement.

It could have done with more pictorial illustration and music.