John Loveridge stunned the U3A poetry enthusiasts with an epic verbal journey through the heroic world of the Sagas.  Starting with Beowulf, one of the earliest poems, that was already old  when it was first written down in 375 AD.  Beowulf, a Saxon tale of the vanquishing of monsters and dragons, comes from the days when the dramatic story would have been declaimed by the ‘scop’, the teller of tales at clan feasts.

Moving on through Piers Plowman and Chaucer, and down through the years to Longfellow’s “Song of Hiawatha”, John showed how versification, alliteration, and the rhythms of poetry developed until they culminated in the pounding verse of Tennyson’s “Charge of the Light Brigade”, Alfred Noyes “The Highwayman”, and Robert Browning’s “How they brought the Good News from Ghent to Aix”.

After the verbal thunder of these works Banjo Paterson’s “Mungo Bill and the Bicycle”, a humorous Bush monologue seemed a bit lightweight.  Some of Henry Lawson’s poems, such as “The Lights of Cobb and Co” are more in the Saga tradition.

But it is all down to taste; though quite how a Shakespeare sonnet, requiring a much lighter oral touch, fitted into the world of the Sagas is a bit puzzling.  The prologue to the Battle of Agincourt from Henry V would have been more in the Saga heroic tradition; and we did not have any Milton; the Messenger’s speech from Samson Agonistes perhaps?

The session ended with a few of the attendees reading their poetic choices. Jim and June Barnes rendered with great clarity and passion two poems written by their son Ron, and Jo Kreibich entertaining with Tom Lehrer’s “When you are old and grey …”.

All in all a strenuous afternoon for U3A poetry lovers. 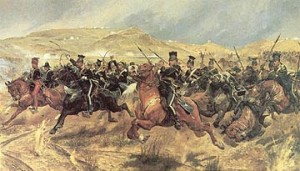 The Charge of the Light Brigade by Richard Caton Woodville Jr.