47 members and guests enjoyed a Power-Point trip through China with Sheila.   She had also mounted a display of ‘Ancient China’ and ‘Modern China’ showing the contrasts in this vast nation. The map of China showed the differences of landscape between deserts and swamps; snowy mountains and hot arid plains. Finally the display depicted the Chinese timeline from Peking Man 500,000 years ago, through the dynasties to modern times with mega-cities sporting their grey skies.

Sheila introduced her friend from London, Beverley St John Aubin. They had been at school together 65 years ago and recently went on a tour of China.   Beverley told us about her experiences seeing the Terracotta Warriors at Xi’an and the joy of climbing part of the Great Wall which had very few people on it – a rare factor in populous China.   She also told us of the Extravaganza at Kangxi where China’s turbulent history was depicted in an open air setting, with mountains in the background lit by hundreds of lanterns. Horses and warriors intermingled with videos to tell of the Mongol hordes of Genghis Khan and Han invaders. 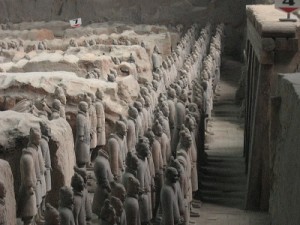 Sheila and Beverley went on to show us the Sacred Valley where the Ming Emperors were entombed, few having escaped the looters of by-gone eras. They told of the long trek on a hot day along the Sacred Way flanked by giant stone elephants, camels and mythical beasts where Beverley took a lift in a peasant’s farm cart resulting in myriads of insect bites!

Light relief was given with a description of Chinese ‘loos’ – from squats to ultramodern electronic. These descriptions caused gales of laughter as Sheila told us of her experiences with ‘rear cleanse’, ‘front cleanse’, hot and warm ‘dries’, then numerous choices of massage which could occupy an hour in the morning. Food was another area which caused amusement as Beverley and Sheila told of the ‘unrecognisables’ which formed their first few meals – white, lumpy, slippery stuff; cubed fatty stuff; whole turtles, complete with head and feet in large tureens and not a grain of rice in sight. Hungry tour members repaired to their rooms to consume the chocolate biscuits they had brought with them!

A sojourn followed, to the Imperial Palace (Forbidden City) with crowds of well-behaved tourists and school children waiting patiently in barriered lines for entry. Fortunately Sheila and Beverley’s tour was whisked away into a private section to view the residence of the Emperor-elect with private courtyard and theatre.

Just a snap shot of a memorable presentation on the Contrasts of China. 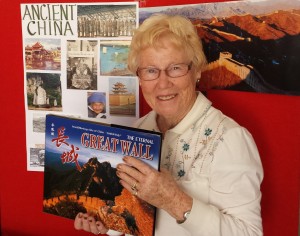