Jim really took us back in history with this presentation; some of which left me wondering how the human race could continue to reproduce when women knew what was in store for them.

One drawing showed a woman being held by the arms and bounced up and down trying to get the baby out.  Who would want to suffer that?  Then there was the story of a pregnant young woman who went for a walk in the woods and saw a rabbit , something that was said to be unlucky for a woman in her condition.  She later expelled some very small baby rabbits from her vagina claiming she had produced them.  The truth was the mother in law had  asked the grounds-man to bring some very small baby rabbits which she inserted in the young person’s vagina.  This trick even fooled prominent obstetricians for a while.

Such stories aside Jim gave an interesting account of the history of obstetrics over the centuries; from dirty primitive conditions, no hygiene or hand washing, women doing the deliveries and high mortality rates for babies and mothers to the very favourable conditions modern day women enjoy.

Jim was very proud of his magicians trick of pulling a pair of Neville Barns delivery forceps out of his bag and demonstrating how they are used.  These were given to him when he left England by a senior college who thought there may be none in  Australia.

A U3A member was proud to acknowledge Jim had delivered three of her four boys among the several other deliveries he had done as a GP over many years in practice.

Thanks Jim for information and entertainment. 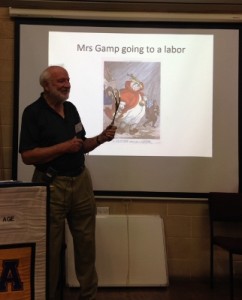