Pam Medland was born somewhere between the two world wars, sometime between Christmas Day and New Year’s Day – not a good time to pick but one doesn’t have a choice.  Times were hard, from the dole queues for grown-ups to the little girl receiving only one gift for two occasions being assured “ It’s double the value dear”!

Pam led us on a journey from those days to now, with anecdotes of sirens, evacuations, the blitz, and nights spent in the underground stations of London. Flanagan and Allen’s  “ Underneath the Arches” was an obvious choice; most of the audience recalled the item.

Musically speaking, the British scene changed dramatically once USA entered the war and Glen Miller soon had our feet tapping. After the war Pam worked in London living in a hostel, surviving the teen scene despite poor wages and clothing coupons. She was employed as a civil servant working in Whitehall for the new National Health Service. These were the years of the Hollywood musicals and we enjoyed songs from Howard Keel starring in “Annie Get Your Gun” and  ‘’Oklahoma”. We had the added bonus of seeing clips from these  musicals and others.

After moving to Australia Pam and her husband settled in WA and  sorted out  the dancing scene, quickly joining in and teaching young people the intricacies of folk dancing from many countries including the clog dance from Northern England.  We watched the Scottish sword dance being performed by females –  an unheard of thing traditionally. And we heard about the science of dancing round the maypole, an English custom celebrating the arrival of spring.

Looking at Pam’s table of memorabilia gave us all an insight into the fascinating life of our presenter which covered among many things a war being remembered on November 11th – the day of Pam’s presentation. 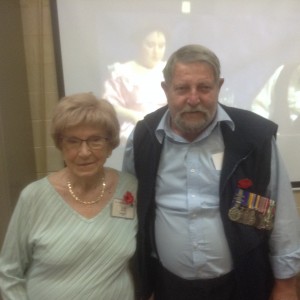