UNESCO CULTURAL SITES OF THE AMERICAS, N.W. EUROPE AND IBERIA

22 members and guests enjoyed a presentation from Jo Kreibich regarding sites which have received World Heritage Listing. She started in Scandinavia showing us the fascinating Struve Geodetic Arc monument in Norway, commemorating the measurement down the longitude meridian to calculate the size of the Earth, using 258 triangulation points from 1815 to 1855.   She then took us to the Polish salt mines museum at Wieliczka where even the chandeliers are made of salt, before showing us the heart- rending site of Auschwitz. 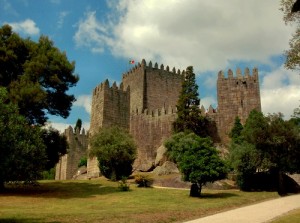 In Portugal, we saw the old Roman town of Oporto, with its wineries on the River Douro banks, the Castle of Guimaraes and the buildings of the University of Coimbra dating from the 1500s. Many spectacular Moorish sites in Spain were shown, topped off by the Giralda Tower and Alcazar in Seville, plus the stylish Moorish mosque in Cordoba. The Sagrada Familia Basilica by Antoni Gaudi in Barcelona enchanted us, as it is to be ‘finished’ in 2026 visited by Jo and Alan of course.

We then were plunged underground to see the Palaeolithic cave paintings at Altamira dating from 35,000 BCE. Later we saw images from cave art in Argentina and were all struck by the similarity of rock art throughout the World.

In Brazil Jo showed us the famous ‘Christ of the Angels’ as seen from Rio de Janeiro, before viewing Castles and tobacco farming in Havana and carved stone spheres in Guatemala.

As we moved to USA, the immense Statue of Liberty, a gift from France in 1876 was described as being a hollow structure made of copper. The original, designed by Frederick Eiffel, is life size and held in Paris.

In Canada, Jo showed us old Viking burial grounds on Newfoundland, plus the whaling station at Grand Bahia with its old rendering ovens. In Ottawa we saw the 202 km Rideau Canal built in the early 19th century to take steam vessels through its numerous locks and on which people skate in the winter.

A memorable session Jo – thank you 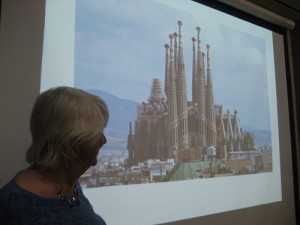 Jo Kreibich with a view of the Sagrada Familia