22 members enjoyed an engrossing afternoon of easy listening and classical songs.  Jo spread around boxes of CDs with Chris Baker assisting, and we all had the chance to choose a favourite track and give a reason for our choice.

Songs ranged from Aled Jones and Bryn Terfel from Wales delighting us with ‘You raise me up’, and Camelot respectively.   These were chosen by Ena Garden, Judy Brealey and John Loveridge.  Still in Wales we enjoyed the ‘Anvil Chorus’ which Bill Dean said reminded him of when Kath growls at him!

Jo then chose a recording from around 2000 when she sang with the Mandurah City Choral Society at the then, ‘Seniors Cits’, now Ac-cent, singing ‘When I’m 64’.  We had a couple of Louis Armstrong songs chosen by John Jones, ‘I’m confessing that I love you’ and for Alan Kreibich’s 81st birthday, ‘When the Saints, go marching in’, followed by Helen Loveridge choosing Frank Sinatra singing, ‘When somebody loves you’.

A change of pace brought ‘Morning’ by Edvard Grieg from the Peer Gynt Suite, chosen by Christine Norman, who had been to the ‘Hall of the Mountain King’  where every chair is carved individually with different animals.

Ross Retalick chose the Alleluia from Pachelbel’s Canon sung by Katherine Jenkins and Kiri te Kanawa sang Delibes’ Flower Duet in its original French, chosen by Kath Dean.   We were then awakened by Luciano Pavarotti’s lusty singing of ‘Nessun Dorma’ from Puccini’s Turandot to remind us of Alan and Jo’s second baby son who hardly ever slept.

Pat Starmer took us to Ireland with John Gary singing ‘How are things in Glocca Morra?’ followed by everyone’s favourite ‘Danny Boy’ in Londonderry Air, sung by Kate Smith.

Paul Robeson singing ‘Trees’, took us all back to the timber industry and St Paul’s Church in Jarrahdale where we had an excursion last month.  We then floated with Peter Allen’s rousing rendition of, ‘I still Call Australia Home’.

An inspiring and relaxing afternoon among friends – thank you Jo. 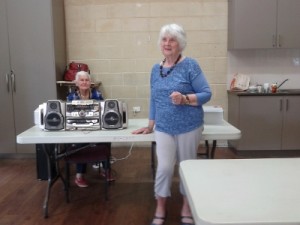