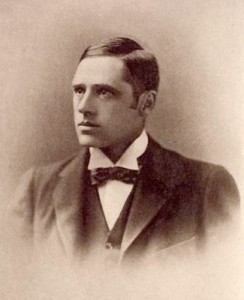 ‘Waltzing’ is derived from the German term auf der walz, meaning ‘on the tramp’.  The apprentices in Germany were required to spend an allotted period travelling around the country gaining experience for their trade.  They were ‘auf der walz’.

The name ‘Matilda’ also has a Teutonic origin, meaning ‘mighty battle maiden.’  Over the years the name was given to the female camp followers who accompanied the soldiers.  These ‘Matildas’ would sleep with the soldiers and keep them warm at nights.  In Australia, the name was given by the workers in the bush to the ‘swag ’or blanket they carried, usually over the shoulder, to keep them warm at night.

In 1895 Andrew Barton Paterson and fiancée, Sarah Riley, visited the Dagworth Station in Western Queensland.  The station was owned by the family of Christina MacPherson, Sarah’s close friend.  While at the station Christina played a tune called Craigielee’ on the zither which inspired Andrew Paterson to pen the words to ‘Waltzing Matilda.’

Prior to Paterson going to Dagworth station, a German called Hoffmeister was one of thousands of union shearers who had gone on strike during 1894 for better wages and conditions and compulsory arbitration.  Unfortunately the shearing shed at Dagworth station was burnt down and Hoffmeister was involved.  When Bob MacPherson and his brothers reported the burning down of the shearing shed it was reported that Hoffmeister had committed suicide by the Four Mile billabong.

Did Hoffmeister really commit suicide?  Nobody knows.  The first allusions to a relationship between Banjo Paterson and Christina appeared in the story of ‘Waltzing Matilda’.  Banjo had been engaged to Sarah Riley for almost eight years and this suggests he was never going to marry her.  This relationship ended and neither woman ever married.  The disgrace of this love triangle, in such a small social circle, was devastating. 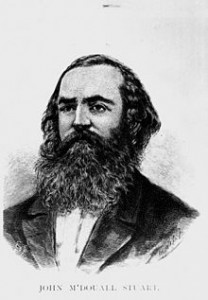 Now, this deeper understanding of the events and people surrounding the writing of the song takes it from a frivolous ditty to a ballad with immense social and cultural meaning.  A story that will excite the imaginations of all Australians, because ‘Waltzing Matilda’ belongs to us all.

The second half of the presentation was on the explorer John McDouall Stuart.  If a definition of a surveyor, pre digital age is a person who can gather information and base accurate measurements of distances and angles using current equipment available, to analyse same including a clear understanding of three dimensional mathematics and produce plans, then Stuart was certainly a surveyor in every sense of the word.

Stuart was involved in many expeditions but his sixth and final expedition in January – December 1862 was the highpoint when he found his way to the coast of the Northern Territory.  This journey took its toll on horses, health of the men and rations.

Stuart arrived back in Adelaide in mid-December 1862 with ten skeletal men dressed in ragged clothes on emaciated horses and rode in a procession through the streets of Adelaide.  The discovery of a route through to the north coast allowed the government to plan the telegraph line and its link to the outside world.  This is clearly the everlasting legacy of Stuart’s surveyed route.

Nearly blind, Stuart decided to visit his sister in Scotland.  He later went to London where he died in 1866.  He remained a controversial figure, lonely and independent, with a fierce pride.

I am convinced he was one of Australia’s greatest explorers. 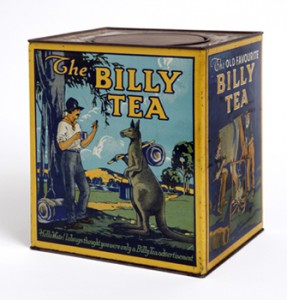