18 members of Mandurah U3A enjoyed an interesting presentation by John Pratt who took us through fascinating Natural UNESCO sites in Canada and the USA.  John mixed up his presentation with photos, text, video clips and commentary.

He showed us Glacier Bay in Canada on the Alaskan border with its mineralised, colourful ice caves and crevasses – the largest non-polar icefield in the world.

A view of a tundra landscape in Rocky Mountain National Park

The Rocky Mountains Park followed with more glaciers, waterfalls, lakes and pines, where scoured rocks are yielding Pre-Cambrian fossils new to science. We saw Nahanni and Yosemite National Parks, with waterfalls, winding rivers and abundance of animals, fish and birds. Alberta’s Dinosaur Park fossils from the Cretaceous period showed the sudden extinction.  He then took us into the flat delta lands of the Peace and Navagasca Rivers where bison and whooping crane make their homes.  We were instructed in the continental drift which created the uplifted rock of Newfoundland with its vertical strata, and Gros Morne (big mountain standing alone).  Nova Scotia followed showing us lizard-like fossils created in the ‘Coal age’ and tetrapod fishes from the Devonian era in Miguasha National Park.

The sites in the USA took us to the Carlsbad Caverns system of New Mexico with mineralised stalagmites and stalactites throughout over 200 caves.  The Grand Canyon in Arizona showed us the erosive power of water to create a spectacular landscape which has been evolving for millennium and was registered as a World Heritage site in 1979.

The tragedy of the Everglades in Florida moved us.  Marsh lands have been drained, farms established and population increase has polluted waterways.  This magnificent habitat has shrunk to a tenth of its original size and was deemed ‘endangered’ in 1993.  Some efforts at restoration were only partly successful, so again it was registered as endangered in 2010.  Now, water is being returned to the wetlands, but nutrients and pollution continue to hamper a return to its former natural state.

Thank you, John for a fascinating afternoon of entertainment and learning. 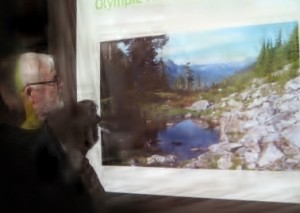