The American Civil War – The Battle of Corinth

Geoff set the scene with some ‘Slave’ music from the time of the civil war. His focus was more on the social and political reasons for the war rather than the large number of battles fought. He did mention, however, that there were more soldiers killed during the Civil War than all other American wars before and since.

Slavery is usually considered to be a key issue for the war, however, there were underlying additional reasons; different levels of development between the South and North. The North was highly industrialised while the South was more agrarian.

Kansas became a focus for hostilities during the lead up to the war. Rich slave owners were able to buy up large areas of land and keep would-be northern land owners out. Riots broke out and Kansas was referred to as ‘Bleeding Kansas’.

Geoff mentioned the prominent role played by many women during the war; supporting the movement of slaves and collecting information, i.e. ‘spying’. The war was also a time of invention; the use of ‘ironclad’ ships, hot air balloons for observing enemy troops, development of the mini-ball bullets and conscription. 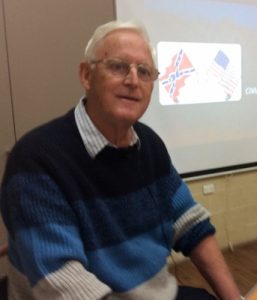