Laurel Reid was unable to give her talk on Sarawak, which has been rescheduled to October.

Sabah at the north of Borneo Island is a melting pot of indigenous and immigrants, respecting all religions and mixed marriages. The capital is the modern city of Kota Kinabalu on the west coast. Mount Kinabalu at 4095M dominates to the east, and many islands in the S China sea to the west. Para sailing, snorkelling and riding the North Borneo railway were enjoyed, as well as visiting large markets and ornate Chinese temples. Journeying to the centre of the island in the shadow of Mount Kinabalu, she visited Poring Hot springs and went on the narrow swinging canopy walk with thunder then pouring rain, staying on a tea plantation. At Ranau the Memorial gardens to the memory of the 2434 POW’s, mostly Australian, who died in the Sandakan Camp or the Death Marches in 1945. 99.75% died, only 6 Australians escaped and survived.

Sandakan, like KK has been rebuilt, and the nearby Sepilok orangutan and sun bear rehabilitation centre is a must visit. During the 2 ½ hour speed boat journey down the Kinabatangan River, pygmy elephants were seen on the bank, then proboscis and silver leaf monkeys. 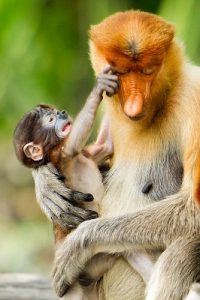 The two days at the world acclaimed Sakau rainforest lodge with rides in small boats seeing orangutans in the wild building nests and eating was breathtaking.

Sabah is a wonderful and safe place to visit.