The subject in this new series was the life and music of Fryderyk Franciszek Szopen known to us as Frederic Chopin. 1810 – 1849. 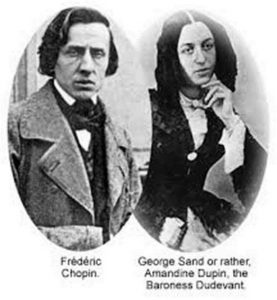 Born in Poland, his parents were both musical. His father gained employment at the Warsaw Lyceum teaching French, which exposed Frederic to society. He started composing and playing the piano at soirees aged 8. Aged 20 he left for a tour of Europe and in two years settled in Paris composing and teaching. He disliked playing to large audiences though out his life.

He had various love affairs before settling down with Amantine Lucile Aurore Dupin, aka George Sands and her children. They settled on Majorca until Frederic was diagnosed with TB. when they moved to the mountains above Marseilles, then to George’s house near Paris. In those places Frederic wrote most of his music – all for the piano. By the mid 1840’s their relationship was deteriorating, and complete by 1848. Frederic toured the British Isles, giving his last performance in London Guild Hall. (One of Christine’s ancestors was the Keeper of the Guild Hall at the time). He died in Paris in October 1849 aged 39. His body is buried in Paris, but his heart is interred in Warsaw.

Various pieces of his compositions were played during the presentation, most were easily recognised. Also some video which emphasised the life story portrayed. 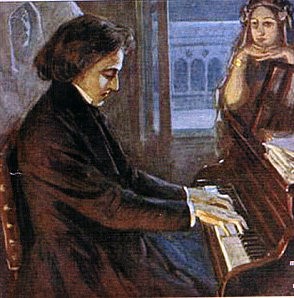