Speaker: Zac Kirkup, MP for Dawesville and Shadow Parliamentary Secretary to the leader of the Opposition
Review written by: Christine Norman

25 July 2017
Zak spoke about his background and said he had wanted to be a Member of Parliament since around the age of 4 or 5 years.   After leaving Governor Stirling High School he attended Murdoch University for six months studying international business. He had also applied to the RAAF to work as an intelligence officer. He did not enjoy university and started volunteering with the then opposition leader’s office.

He worked with 18 months with the late Senator Judith Adams who used a small aircraft to connect with the community. He accompanied her to Canberra several times which gave him an appreciation for working with the community. Senator Adams stood up for the breaking up of the single desk. The Liberal Party asked him to undertake geodemographic testing, and as a test he had to interpret polling.

In 2007 he was asked to join the Liberal Party head office as a campaign officer. The Federal Liberal Party won the seat of Cowan. He then became the Deputy Director of the Liberal Party at age 21, and joined Colin Barnett’s office for 4-1/2 years there as policy adviser. One issue Zak talked about in particular was the severe drought in 2013. He toured the wheatbelt communities with Colin Barnett to talk to farmers at Moorine Rock. It was at the Premier’s office where he met his now fiancée Michelle!

He then worked at BGC with the late Len Buckeridge and worked as a financial strategist.

Zak and Michelle moved to Halls Head at the end of 2015, and in April 2016 he gained preselection for the seat of Dawesville. He was ultimately elected by 343 votes.

He said that he has a good relationship with David Templeman, and one issue they are dealing with is sharks. Another issue is that in mid-2018 a select committee will hand down a report on assisted suicide and euthanasia.

After a series of questions including:

Zak finished his talk at 2.30pm, and Liz Whichello thanked him on behalf of the members. Zak commented that his $50 cheque given to him by U3A will be given to charity. He chose the Mandurah Wildlife Group. 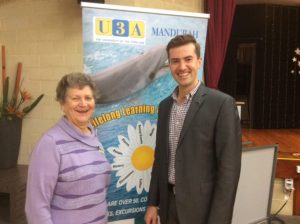