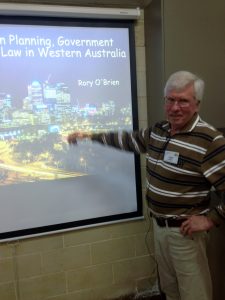 Rory O’Brien spoke about all the three levels of government planning.

He explained the Metropolitan Planning Scheme and the Local Government Planning and policies. One of the far-sighted planners of the Perth region in the 1950’s was Gordon Stevenson, who looked at transport schemes, the location of shopping centres, the University of WA and many other future planning features. He talked of the separation of environment and town planning. He talked of the availability of water aquifers and the Jandakot and Gnangara Mound for water security with a small proportion coming from our dams.

Rory also spoke of Mandurah’s planning and that of Bassendean.  He mentioned the more recent aspect of public consultation.

Rory continued his presentation by telling us about the low density of the city of Perth. This adds problems of infrastructure, lengthy roads, wires and piping. Perth is now looking at infill to capitalise on the existing infrastructure and making areas of mid to high density around traffic hubs. He spoke about the urgent need for public transport.

Rory finally spoke to us about small Wheatbelt towns which were depopulating with the traders vanishing. 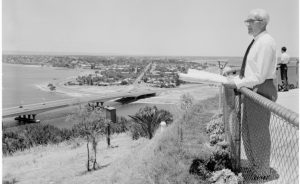 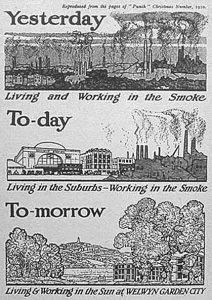