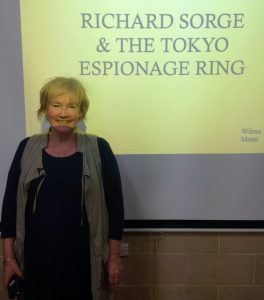 Richard Sorge (October 4, 1895 – November 7, 1944) was a Soviet military intelligence officer, active before and during the Second World War, working as an undercover German journalist in both Nazi Germany and the Empire of Japan. His code name was “Ramsay”.

Sorge is most famous for his service in Japan in 1940 and 1941, when he provided information about Adolf Hitler’s plan to attack the Soviet Union, although he did not succeed in finding out the exact date of the attack.

In mid-September 1941, he informed the Soviet command that Japan was not going to attack the Soviet Union in the near future, which allowed the command to transfer 18 divisions, 1,700 tanks, and over 1,500 aircraft from Siberia and the Far East to the Western

Front against Nazi Germany during the most critical months of the Battle for Moscow; one of the turning points of World War II.

A month later Sorge was arrested in Japan on the counts of espionage. The German Abwehr legitimately denied he was an agent; USSR repudiated him and refused three offers to spare him through a prisoner exchange. He was tortured, forced to confess, tried, and then hanged in November 1944. Two decades passed before he was posthumously awarded the title of Hero of the Soviet Union.