Alan Bennett was born in Leeds. He learned Russian during his national service, applied for a scholarship to Oxford University and graduated with a first class degree in History. He remained there for several years teaching Medieval History.

In 1960, along with Dudley Moore, Jonathan Miller and Peter Cook, he achieved fame at the Edinburgh Festival Fringe. The show continued in London and New York. Many television, stage and radio plays followed with screenplays, short stories and non -fictional prose. His expressive voice made his readings popular.

Pam Medland then played a monologue, spoken by Alan, called “A Chip in the Sugar”. His story was that he lived with his mother and took good care of her. Trouble arrived with an old boyfriend who took her out on trips and wanted to marry her. Luckily he was found out to be a rogue so mother and son returned to their old, happy routine.

Olive quoted a fantastic monologue about an old lady who did not want to move into seniors’ accommodation. She liked to do her own dusting – even after she fell and hurt her leg. Thora Hird had read this monologue and Olive did it just as well. She had a wonderful memory and her presentation was excellent and greatly admired.

Julie Walters presented “The Outside Dog”. Her husband loved the dog but she did not, nor did she like it in the house. She wondered how her husband’s trousers were covered in blood and mud and was shocked when he was arrested for murder. He was arrested but found to be not guilty. The police could not find the trousers but she did and hid them under the kennel.

The monologue finished without giving us a solution – typical of Alan Bennett’s work but we thank Pam and Olive for a most enjoyable afternoon. 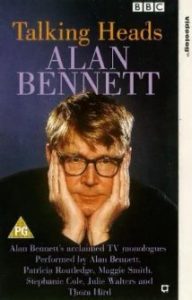