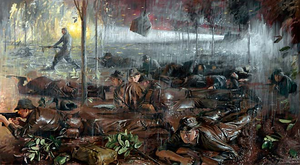 The Battle of Long Tan (18 August 1966) took place in a rubber plantation near Long Tan, in Phuoc Tuy Province, South Vietnam during the Vietnam War. The action was fought between Viet Cong and North Vietnamese units and elements of the 1st Australian Task Force (1 ATF) shortly after its lodgement in Phuoc Tuy.

1 ATF began arriving between April and June 1966, constructing a base at Nui Dat which was located astride a major communist transit and resupply route and was close to a Viet Cong base area. After two months it had moved beyond the initial requirements of establishing itself and securing its immediate approaches, beginning operations to open the province. Meanwhile, in response to the threat posed by 1 ATF, a force of between 1,500 and 2,500 men from the Viet Cong 275th Regiment, possibly reinforced by at least one North Vietnamese battalion, and D445 Provincial Mobile Battalion, was ordered to move against Nui Dat.