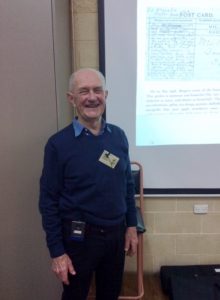 The source of his material was “Creative Lives: Personal Papers of Australian Writers and Artists”, published by the National Library of Australia. In the course of his presentation John drew judiciously from this rich collection of stories, photographs, sketches, paintings, diaries, cards and letters held by the National Library. For example, we learnt something of the humiliation suffered by Jews in war-time Europe from the diaries of Hungarian-born Judy Cassab; the concerns of Eleanor Dark and friends during World War II in Australia (when will it end? will democracy survive?); the rough life led by Xavier Herbert who dreamt of writing a great work about the Aboriginal people and brought the dream to reality with “Poor Fellow My Country”; the originality of Rosemary Dobson’s poetry; and the impressive work of Kevin Gilbert in pursuit of Aboriginal self-determination.

An interesting example of Kevin Gilbert’s writing is his story of creation from an Aboriginal perspective:
…..The time before time began, the world was a twilight world….Aboriginal ancestors and the spirit people, they made the law, they carved the law on the rocks, the trees, the sacred Jurungas. It was they who, at the request of Ba’aime, the great All-spirit, prepared the land, the sky, the sea, in preparation for the coming of the ‘Kooree’ – the people.

Along with other members of the audience I enjoyed June’s reading of four poems provided by John. “The Bystander” by Rosemary Dobson appealed to me. It describes the significance of the insignificant in paintings – very clever!

John dealt with five of the 22 literary figures featured in “Creative Lives”. He might well consider a future presentation on another five from the collection. It would be well worth the support of our members. 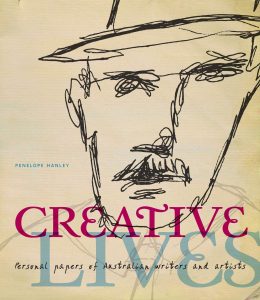