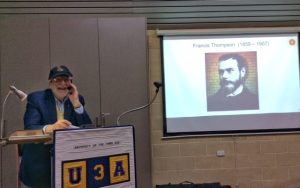 Jim speaking about Francis Thompson’s life and love of cricket

Jim talked about how artists’ illness affected their art. Beethoven (1770-1827) was stone deaf in later life yet composed wonderful music and proved he was a genius. He had smallpox as a child and it was said he had the features of a gargoyle. He had continual buzzing in his ears and suffered from depression, but his speech was not affected. The cause of his deafness was never diagnosed.

Claude Monet (1840-1926) painted outside rather than in a studio. His first impressionist picture was “Sunrise” and he painted many pictures of his garden, especially his Japanese bridge. His exhibition brought him fame. In 1912 he had cataracts in both eyes, a devastating blow which left him with only 10% vision and he saw everything in a fog. His sight improved after an operation and he painted 22 panels of his garden which were promised to the government. These hang in the Musée de l’Orangerie, Place de la Concorde.

Many writers were addicted to opium – W.H. Auden, Coleridge and John Keats. The latter qualified as a doctor but did nor practice. His best known poem is “Ode to a Nightingale”, the first lines refer to his drug taking. He died of T.B. as did Francis Thompson whose poetry too was affected by his drug taking. He had an obsession with cricket which he watched at Old Trafford at every opportunity. He wrote a poem called “At Lord’s”.

Vivien Leigh (1913-1967) was a great beauty and a wonderful actress. Her most famous role was in “Gone with the Wind”. Although she was married, she had a public affair with Laurence Olivier whom she married. She was bi-polar and impossible to work with yet she could always deliver on stage. She was highly intelligent, a manic depressive and lost her reasoning power. In 1944, T.B. was diagnosed. After treatment, she smoked, drank and partied all hours as her mental state deteriorated. T.B. killed her in the end. 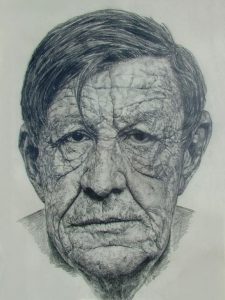 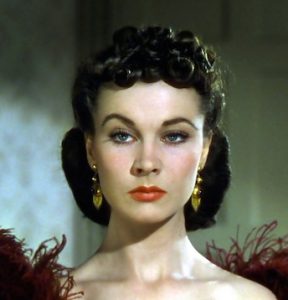