John gave us a comprehensive tour of National Parks from the southern tip of South America in Argentina to the northern countries of the Caribbean. It was comforting to hear how these areas were being managed to protect native animals, birds, plants, forests and fossils. Children are taught in school appreciate their unique environment.

Argentina has mountains and numerous glacial lakes, subtropical forests and a semi-circle waterfall with its permanent rainbow and 270 cascades. In the centre there are amazing rock formations with fossils from the Triassic Period 245 million years ago. 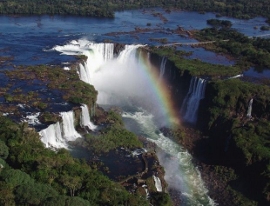 The Argentinian opossum is the only marsupial living outside Australia.

Brazil has many rare and endangered species. Trees in the large Atlantic Forest are numbered and only 5 trees per hectare can be felled at a certain time. Large fresh water lakes contain the biggest variety of fresh water fish in the world while the Galápagos Islands have underwater sea reserves loved by divers.

In Guatemala, lush vegetation covered major sites of Mayan civilisation which had lasted from 600 BC to 900 AD then were abandoned and rediscovered in the 17th century, Honduras has 2000 indigenous people preserving their way of life as does Panama which was visited by Columbus in 1502.

We had a wonderful afternoon. Thank you, John.