Albert Kahn at his Paris office, 1914

Chris Baker’s presentation of the photographer Albert Kahn was one of those rare moments in U3A presentations when members were introduced to a mostly unknown, unheard-of character who, by the end of the afternoon, members were hoping for more!  Abraham Kahn was born in Marmoutier, France close to the German border but prudently changed his name to Albert as tensions mounted in Europe.  He became a banker and philanthropist but died a pauper in 1940. 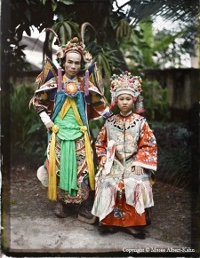 In 1893 Kahn bought a large property in Paris and established a unique garden which today is the site of a French national museum which houses Kahn’s historic collection of photographs and films. It is this collection Chris introduced us to via  a BBC DVD – one of those rare occasions when a presenter is fully justified in relying heavily  on visual content. Only through this medium could we be shown faithfully the work of Kahn; photographs black and white and coloured, and movie films. Between 1909 and 1939 Kahn and his chauffeur and photographer companion Alfred Duterte collected 72,000 coloured photographs and 183,000 meters of film amassed during Kahn’s business travels overseas.  He adopted the first practical medium for colour photography known as Autochrome, recording everyday life in places as diverse as Japan, Mongolia, Ireland and of course France.  He began documenting France in 1914 just days before the outbreak of WW1, recording not only the devastation of war but the struggle to continue everyday life and agricultural work. 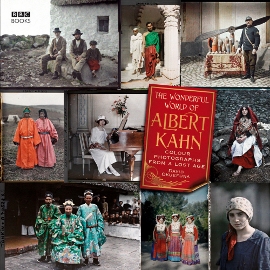 Chris has much more on this  man, enough to fill more,  equally engrossing presentations including Kahn’s travels to USA. Fingers crossed for next semester!