This presentation opened in the first half with a very quick background on the facts and figures describing the quest for a federated Australia.  The second half of the presentation was a video describing the difficulty politicians had in persuading the people of Australia on the merits of Federation. 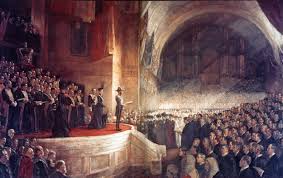 Prior to Federation, which is hard to imagine in modern day Australia, each of the Australian colonies was more like its own country with custom houses, different railway gauges and even their own military.  It was inevitable that Australia would be Federated, but in fact it was not even a very popular idea at the time.  Hard work and the dedication of a small group of people, ensured the colonies eventually come together to form a nation.

Henry Parkes (1815-1896) is often called the “Father of Federation” for his long time role as an activist for the cause.  Parkes was five times the Premier of NSW and one of the most leading men in colonial politics.  In 1889, in what became known as the “Tenterfield Address” he called the colonies to unite and create a great national government for all Australia.  This speech had an immense influence on the movement toward Federation.  Parkes died in 1896 after a life at the forefront of the Federation movement, nonetheless he never saw his dream achieved.

The first Referendum was held in 1898 so that people in the colonies could vote on the constitution.  Queensland and Western Australia did not take part, and in New South Wales it did not get approved.

A point of contention was the location of the national capital, with both Melbourne and Sydney claiming the right to be the capital.  A compromise was reached whereby a separate capital would be created in New South Wales, provided it was not closer than 100 miles to Sydney.  Until such time as the new city was established it was agreed that Melbourne was to be temporary capital of Australia.  The decision for the Canberra option was made in 1908.

When the amended Constitution was put to a second round of referendums in 1899 there was great public interest, and pro and anti Federation organisations formed in all the colonies.  This time the referendums were successful.

The Commonwealth of Australia was proclaimed on 1st January 1901 in Centennial Park, Sydney by Lord Hopetoun, the first Governor General.  By this time the Australian people had embraced the idea and turned out in their thousands for celebrations all over the new nation.

The colonies became states and a Federal Parliament was formed according to the Constitution.  Edmund Barton became the first Prime Minister of Australia.

The second half video showed the rocky road to nationhood, bringing to life the history of making events, personalities and experiences that ended in the Federation of Australia.