Sheila’s presentation was a humorous but informative talk on the contrasts of weights and measures over the globe, through the ages.  She had a packed house laughing at different sizes of human feet and hands to measure anything from lengths of cloth to the height of horses.  The gauge of our standard railways was determined 2000 years ago by the size of two Roman warhorses!  Following the same pattern, the size of an American space rocket booster was limited because it had to be transported by rail and the tunnel was only slightly larger than the rail gauge. The Romans have a lot to answer for. 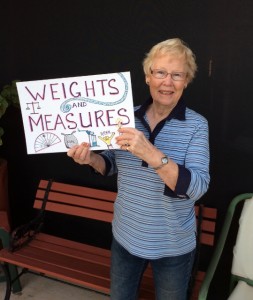 Sheila then related the yearning for standard measures throughout the World. Back in ancient Egypt the pyramid builders had a standard ‘cubit’ measure. By the 18th century there was still no standard in Europe and contrasts in weights and measures continued to hamper trade.

Mechain and Delambre measured the length of France and extrapolated that to a section of the Earth itself. The new ‘Metre’ was 1 ten millionth of the distance from North Pole to the Equator, so they urged that the whole World should use this metric system.  Sheila pointed out that a base of ten
(metres, kilometres etc.) was not ideal as there never could be a definitive third – 0.3333333 repeating.  A duo-decimal system based on 12 would have been more appropriate.  So peoples and countries were slow to take up the new metric system. In 1999 the Mars Climate Orbiter was lost, veering off never to be seen again.  NASA investigation found that one team of engineers had used imperial measure and the other had used metric.  This contrast was an expensive mistake.

Sheila finished her presentation showing how many lives were lost in ship wrecks because navigators could not work out where they were at sea. Latitude was easy, but there was difficulty calculating longitude to plot a ship’s location so unseen reefs tore the hulls of vessels.  Accurate clocks were the answer so that one clock on board would be maintained at the home port time and the actual ship’s time was taken to find ‘local noon’.  The difference between the times could then accurately plot Longitude and ship wrecks diminished due to the English chronologist, Harrison creating an accurate clock.