Humphrey’s presentation of the lives of Clifford Mortimer and his son John Mortimer was informative, highly entertaining and most enjoyable.

Clifford (1884-1961) was acknowledged worldwide as an expert in Family Law and the law of wills and inheritance and wrote a treatise on both. Unfortunately at the age of 51 he suffered the sudden onset of total and permanent blindness.  Because he needed to work, his wife accompanied him to the office and read his notes aloud to him.  Travelling to work by train she would often deal with some very private and personal material from divorce cases. He seemed to take delight in shouting to her to speak up when she came to the embarrassing details.  This segment was shown on video so we saw the reaction of fellow passengers.  The man who drove his car, which was an absolute beauty, treated it as if it was a person. 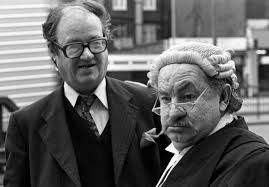 John Mortimer (1923-2009) (pictured), was also a barrister but a reluctant one.  He only ever wanted to write but needed a day job to secure an income.  So he studied law at Oxford and worked nervously and insecurely in the courts.  When time permitted he wrote novels and dramas for stage and screen.

Somewhat surprisingly, John Mortimer rose to be a Queen’s Counsel and won some notable –and notorious- cases in addition to becoming a very successful writer.  ‘Rumpole of the Bailey’ was one of his creations.  He apparently had great successes with the ladies despite being quite unattractive and having mildew on his teeth.

Thank you Humphrey for a most interesting and entertaining afternoon.