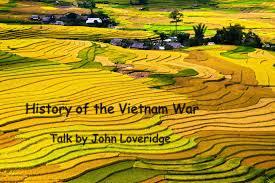 The membership turned out in large numbers to hear John Loveridge give a talk on the history of the Vietnam War. John did not want to speak about the horrors of war, rather the background to the strife. He outlined the ancient history of how Vietnam had been under the domination of China, France and the Japanese. After WW2, with the spread of Communism the US became involved and were subsequently drawn in more and more supporting the South against the Communist North.

John spoke of the high levels of rice production, rubber plantations and Buddhist religion of the people. He also spoke of the effects of ‘agent orange’, the memories of US helicopters, AK47 rifles and the military leaders of both the North and South. He also spoke of the various American presidents and how they had an impact on the course of the war.

It came as a surprise that John did not see the North Vietnamese enemy during his two tours of duty. His scariest moments were interactions with the wildlife; snakes, noisy monkeys and wild pigs. Cattle were also regarded with caution as the enemy used them to test out minefields and could be close by.

John also detailed the history of Australia’s involvement in the war, the lack of citizen support back at home and eventual withdrawal before the war’s end. A most enlightening talk from someone with first-hand knowledge was appreciated by all. 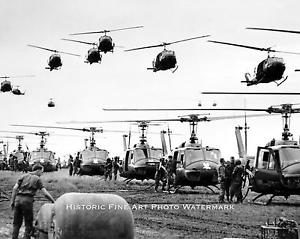 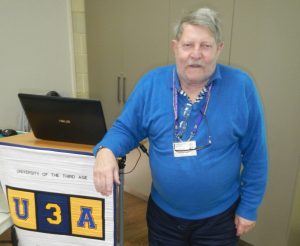