Peter presented his second talk on Winston Churchill to a well-attended group of members on 24 October 2018. The early part of this period, between 1930 and 1939, saw Winston Churchill in the political wilderness. He watched as Hitler grew stronger and he spoke against German rearmament, however, he was a lone voice urging Britain to strengthen itself to counter German belligerence. He urged the government to rebuild the Royal Air Force and create a new military defence. During that time he was overlooked as Minister for Coordination of Defence. The 1936 abdication crisis was another distraction in Britain’s neglect of Germany’s growth.

On 3 September 1939, war against Germany was declared and Winston was appointed First Lord of the Admiralty. After some issues Chamberlain resigned in May 1940 and the King asked Winston to be Prime Minister. In addition, he also took on the position of Minister for Defence. His oratory skills were soon apparent and gave the people great inspiration at a time when nerves were tense. The Battle of Britain was fought and won by ‘The Few’ fighter pilots of the Royal Air Force. He soon realised that Britain was woefully ill prepared to fight the German super-power. He therefore rapidly developed a strong bond with the United States and President Roosevelt. Winston visited the US and kept in continual contact with the President. He secured a good supply of food, oil and munitions. 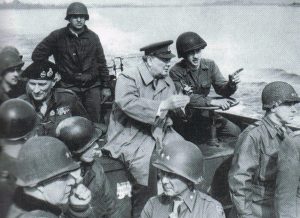 By 1942 the war in North Africa was won at ‘El Alamein’, which Winston referred to as, “The end of the beginning”. Apart from the war Winston was also battling depression which he referred to as, ‘the black dog’. With the Japanese attack on Pearl Harbour and America finally entering the war Britain was guaranteed a very strong ally and wholehearted support. After Roosevelt’s death Winston worked well with President Harry Truman. 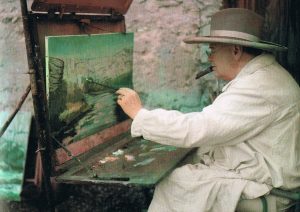 Churchill relaxing with his paintbrush 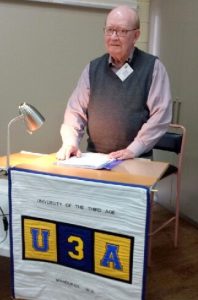