23 members and guests listened entranced whilst Roy introduced us to the tiniest organisms inhabiting our planet. This is the World of Bacteria and Viruses measured in micro metres – some as small as a ten millionth of a metre.

Microscopes. Roy told about the two men who put together the first microscopes with lenses made of blobs of glass. Leeuwenhoek and Robert Hooke in the late 1600s. These early light microscopes had an amazing magnitude of around 270x. We then were shown how electron microscopes gave detailed and sharp images, using vacuum tubes but no light.

Protozoa. Now came the Protozoa which we had all heard of in our far off school days, but were fuzzy in our understanding. These single celled animals often cause havoc in our species, with amoeba causing dysentery, trypanosomes causing sleeping sickness and Plasmodium inducing malaria.

Bacterial structure.     Some causing us pain, included the long stripy bacillus, the round coccus ( as in streptococcus) the one looking like tiny sausages (E Coli), the wiggly ones (spirilla in syphilis) The most dangerous and highly resistant to modern drugs – staphylococcus , or golden staph, MRSA.

Of course Roy told us about all the good things bacteria do. They recycle all the dead stuff, they ferment our soy sauce, they eat oil spills and help our pea plants to fix nitrogen in the soil. They even digest wax in the guts of bees. So we couldn’t live without them. 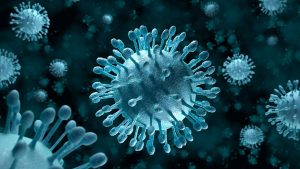 The Hepatitis virus
After the tea break it was the turn of viruses. Wow, what tiny fellows they are! One thousand millionth of a metre. These nasties get into cells and cause horrors like poliomyelitis which is not eliminated, but on the way back. They cause herpes, which can attack lips or genitalia with equal vigour. Do you know the difference between love and herpes?     Herpes lasts for ever!

Cholera, plague, leprosy and even whooping cough. The list goes on and on.

Extremophiles. Here are living wonders who inhabit the most torrid or icy areas of our planet. In the superheated, sulphuric ‘smokers’ where ridges in our deepest oceans spew out mineralised material from the Earth’s mantle at 600*C. – there is life. So no need for light, no need for oxygen, can resist enormous pressures and steel melting temperatures. This discovery completely changed our opinions of life and set us looking for extra-terrestrial life on other distant planets with renewed hope.

Thank you Roy. A most fascinating afternoon.