Bill explained how Kalgoorlie had grown rapidly in population from the early days of gold discovery until the establishment of a modern town. Owing to the imbalance of male prospectors and miners relative to females, prostitution became an early local business. The police decided that a ‘containment’ policy would be the best way to manage the situation. Hay Street was ‘zoned’ as an acceptable location and further that prostitution must be managed by women.

A Kalgoorlie brothel on Hay Street

Two-up was a common outlet for gambling in the early days and it flourished throughout Australia. Once legalised gambling was introduced Two-up was prohibited and Kalgoorlie Two-up activities were forced into the bush. Later, Kalgoorlie was accepted as a legal gambling activity.

Gold stealing was obviously illegal, however, it was locally condoned as a means of ensuring that some currency was retained in the town rather than being removed to Perth. A recent example was referred to whereby four men found a large nugget on someone else’s claim but posted a photo of themselves on ‘Facebook’ that led to their conviction for gold theft. 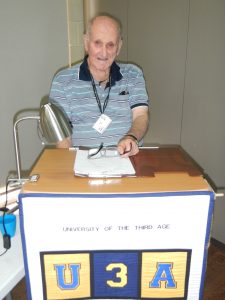