The Irish potato famine of 1840 began migrations to many parts of the world. In 1868 the Hougoumont set sail for Western Australia carrying settlers, convicts and a number of Irish political prisoners. These Fenians mostly literate men, were allowed materials to publish a ship’s news sheet that helped passengers ease the boredom of the long voyage. But while editing their paper The Wild Goose, the men formed a bond of friendship and trust, so that when incarcerated in dreadful single cells on the fourth level at Fremantle Gaol they determined to escape. 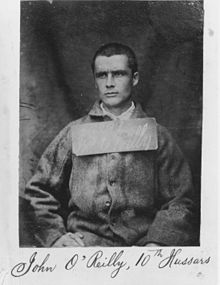 Deploying an impressive array of media; video, music, and live poetry from members of the audience, Sheila told the story. In letters to families and friends on the outside, the Fenians made clear their yearning for home. James Wilson sent a letter to John Devoy at The New York Herald and when John Boyle O’Reilly escaped to Boston, groups of supporters began raising money to bring the boys home. John Breslin sailed to Fremantle. Posing as an investor, he met people in high places and was able to make contact with some of those in gaol. Meanwhile in America, the conspirators bought the Catalpa, a whaler which would not arouse suspicion in Australian waters. Arriving off Rockingham, Catalpa stood out clear of the three mile limit while a boat was put down and rowed to the beach for the men. Almost too late they were spotted and a Naval cutter gave hot pursuit but Lady Luck was on their side that day and soon the Fenians were safely aboard sailing under the Stars and Stripes for home. 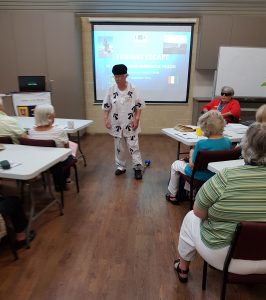 Sheila Twine as a convict