On Wednesday 7 February a large audience heard from Roy Done about the development of scientific discoveries over the centuries, from Democritus in the fourth century BC to Professor Michelle Simmons, Australian of the Year 2018.

Roy started with mentioning one of President Trump’s advisors, Gloria Copeland, a televangelist who recommends not having a flu shot, but trusting in Jesus to protect you from the flu! He used her name to illustrate some of the scientific rubbish being put out as fact.

Roy then talked about Quantum Computing and the super-high speed computer that Michelle Simmons is working on; he mentioned Eddie Woo, who, teaching maths online, is making children love maths.

Then we heard about the development of atomic theory from the time of Democritus and his mentor Leucippus, who first proposed the existence of atoms, that were indivisible, through to the beginning of the 20th century when James Chadwick proved that not only could atoms be divided, but they have a nucleus comprising, neutrons and protons, with electrons circling around outside the nucleus. And they can be divided.

Roy also led us through an amusing practical example of scientific method, from observation to theory and result, describing how he finally worked out where an annoying beep was coming from in his house! 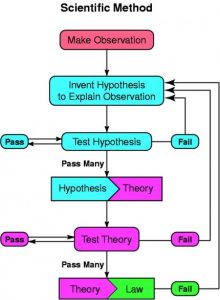 He then produced a chocolate fudge tin, containing a sock (a clean one, he assured us) which in turn held some zinc material. He held this under the light so that as it absorbed the light, the electrons moved down from higher energy levels so that it glowed much brighter. 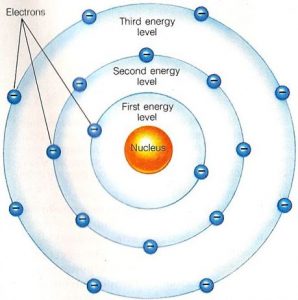 Altogether a very interesting talk on a quite complicated subject, that Roy made understandable. 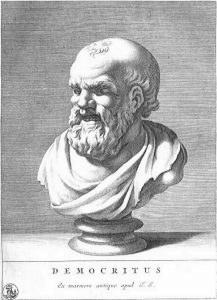 Democritus as he may have looked