A full house assembled for U3A’s first lecture for the new year. The room was decorated with Scottish flags and there was a distinct smell of something cooking. “Could that be the haggis we were promised?”
Six U3A members had spent many hours preparing the presentation. Jock Fyfe was tackling the ancient geology tracking Scotland’s journey along the tectonic plates from an area not far from the South Pole.
Ena Garden then enthralled us with her talk about Buckie, a small fishing village on the Moray Firth. Jock and Ena gave us a quick lesson in the Doric language which kept us laughing. David Smeeton acted as MC to keep us all in order and regale us with horrid jokes against the Scots.
Wilma Mann told us about the origin of the kilt and tartans, using Jock, resplendent in his regalia of short kilt, gartered socks and heavy belt as her model. 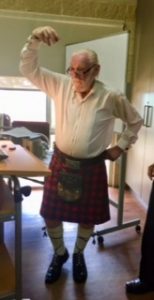 Sheila Twine led us in singing The Skye Boat Song with Norma Hales playing the violin to keep us in tune.
The team included a brief history of the Scottish nation, an outline and readings from Scottish literature plus Mendelssohn’ Hebridean Overture – Fingal’s Cave.
The PowerPoint slides featured glorious Scottish scenery which made everyone want to visit, regardless of the terrible weather.
The bravest of the multitude tasted, and even enjoyed, the haggis. English tasters suggested the addition of Worcester Sauce! 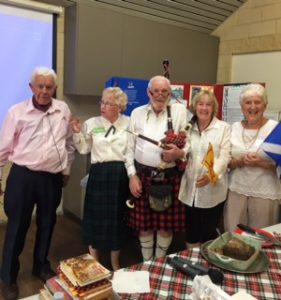 The Scottish team and a haggis