At the general meeting on 23 Jan 2018, Barney Johnson was the guest speaker.

A young 87 with very limited eye sight giving his first presentation, the audience was entranced at his life history.

Born in Fremantle, his parents moved around the state running boarding hostels.
Leaving school at 14, Barney worked as a cattle drover in the Kimberley.
At 15 ½ he put his age up to 18 to join the army in 1946, and was soon off to Japan. 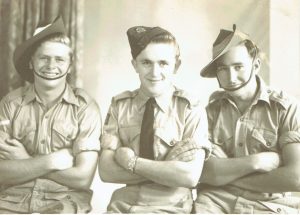 Stationed in Kure, a huge ship building port, he was in Hiroshima to start clearing the city, and helped the destitute. 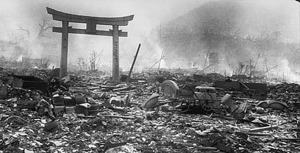 In Tokyo he met General McArthur and sat in on General Tojo’s trial.
The Christmas party they gave for the orphans was memorable as the balloons were actually condoms.

Demobbed before he was 18, he undertook a wool classing course, which he found boring. Then did many years of shearing around the country. Finally he worked at CBH for the remainder of his working life.

He also enjoys entertaining with wonderful miming often dressing in character. He finished with two songs. Everyone thoroughly enjoyed his presentation and wanted more. 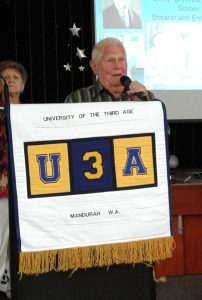