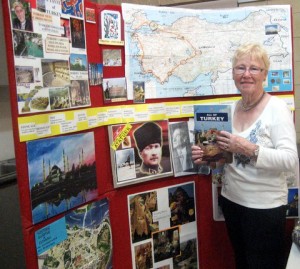 Sheila’s presentation was divided into three sections, first the history of Turkey, second the father of Turkey, Mustafa Kemal known as Ataturk and thirdly Hussan Jimea, an entrepreneur from Cappadocia.

The presentation started with the Palaeolithic period through to the present Republic of Turkey. Turkey is considered to be one of richest countries in terms of archaeology and is by far the biggest “open air museum” in the world.  The Romans, Byzantines and Ottomans were established and flourished in this huge melting pot.  It has always been a bridge between the East and West.  The unbelievable ruins of Ephesus was an ancient Greek city built about the 10th century BC and excavations at Troy reveal this city had been rebuilt many times.

The magnificent Hagia Sophia originally built as a Christian church in 532 is now a museum and the nearby Blue Mosque known by this name because of the dazzling blue tiles in its interior and famous for its six minarets are prominent attractions in Istanbul.

A slide was shown of the Whirling Dervishes from Konya.  This unique form of dance is where the dancers spin in a circle and eventually become trancelike.

After our brief history of Turkey, Sheila focused on Mustafa Kemal, known as Ataturk.  He was born in Salonika, now Thessaloniki in Greece in 1881.  At the age of twelve, Mustafa decided that he would take the entrance exam at a military high school.  After years of military training, he entered the Ottoman Army as a captain.  World War 1 was a decisive period in Mustafa Kemal’s life.  The Ottoman empire joined its allies Germany and the Austro-Hungarian Empire to form the Central Powers, fighting against Britain, France, Russia and Italy.  Mustafa Kemal predicted that the Allied Powers would attack at Gallipoli.

Under his leadership, the Turks prevented the Allied invasion of the Dardanelles in 1915.

In 1918, Mustafa Kemal returned to Constantinople to find it occupied by the victorious British and French.  The Ottoman Empire was no more.

In 1923, the European powers signed the Treaty of Lausanne, recognising the Republic of Turkey.  As the first elected president of the Republic, Mustafa Kemal would lead one of the world’s speediest and most effective modernization campaigns ever.

He abolished the office of the Muslim Caliphate, secularized education, encouraged Turks to wear western-style clothing, not to wear the fez or turban, and in 1926, Mustafa Kemal abolished the Islamic courts and instituted secular civil law throughout Turkey.  Women now had equal rights.  He replaced the traditional Arabic script for written Turkish with a new alphabet based on Latin.

“Ataturk” laid the foundations for the modern Turkish state.

The third part of the presentation included the entrepreneur Hussan Jimea from Cappadocia.  Hussan was born in a cave but from an early age he was determined to better himself.

He established a 5 star hotel in Cappadocia where he included the cones from the caves and named it the Anatolian Hotel.  He set up a stable of horses which enabled tourists to hire the horses and explore the area. He also set up a carpet emporium and dye works where woman from the area were employed to manufacture the carpets. Tourists were able to see firsthand the intricate production of carpets therefore he became a major employer of woman.

Sheila attracted the largest number of members to her presentation this year and it is no wonder why because her lecture was enthusiastic and effortless.  Thank you Sheila for a wonderful presentation.