This presentation opened with a look back in time beginning with the stone age statuette of a female Venus figure dating back to 28,000 to 25,000 BCE.  Many photos were shown dating from the Palaeolithic period to bring us up to the Carolingian and Ottonian age.  The lecture about medieval and gothic art actually started at this time because it was the beginning of a centralized political power for the first time since the dissolution of the Roman Empire in 476.  During this period following the Roman Empire, the only unifying force on the European continent was the Roman Catholic Church. 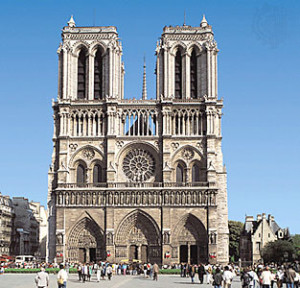 Christian missionaries went even further than the Romans.  Ireland, unlike England, had never been part of the Roman Empire, and the missionaries who reached Ireland in the early Middle Ages found a religiously responsive population.  They congregated in hermit groups which eventually developed into the first monasteries.

The Book of Kells is celebrated for its lavish decoration and has been on display in the old library at Trinity College, Dublin since the mid-19th century.  Many slides were shown of this famous manuscript.

Artistically, the Ottonian period further developed the expressive style of the Carolingians, often in a narrative style.  Perhaps the chief monument of this style is the extraordinary set of bronze doors from the monastery at Hildesheim in northern Germany.

Moving to the end of the 11th century, we encounter one of the masterpieces of narrative art, an enthralling embroidered history of the conquest of England by William the conquer called the Bayeux Tapestry which in fact is an embroidery, nearly 225 feet long and 10 inches high.

The palace of the popes in Avignon is the biggest gothic palace in the world.  Construction began in 1252 AD and six popes resided in this palace but departed in 1377, returning to Rome.

Four crusades began in 1096 and the last and fourth one was completed in 1204.  Vast numbers of people visited holy places and the increase in pilgrims was covered by an extensive network of roads and facilities leading towards the three main destinations, Santiago in Spain, Rome and Jerusalem.  The glories of Romanesque architecture and sculpture still mark these routes.

Notre-Dame de Paris was among the first buildings in the world to use flying buttresses and evolved from Romanesque to the Gothic style. Many slides were shown of Gothic architecture.

Duccio’s masterpiece, the “Maesta” (1308 -1311) which means majesty shows the Madonna and child enthroned, surrounded by adoring saints and angels.  Paintings by Giotto and Cimabue were also viewed.

The bubonic plague was a pandemic that swept through Europe and killed as much as three-quarters of the population and radically changed the course of society and art.

A short video was shown of the late medieval world and the presentation ended with a summary of this period.  It is estimated that 100 million died at the hands of war, poverty and plague, but during this time new ideas and ideals were born and much of the groundwork was laid for the world we know to-day.