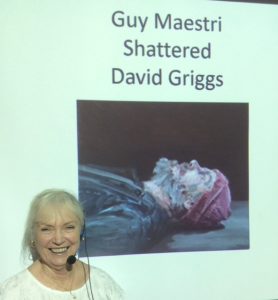 Carol Wauchope presented the Archibald Portrait Prize in a unique way.  She showed us the  paintings of the winners and the finalists on the screen as normal.   The new element was her readings of the artists actual words. She also read words written by the sitter.  Carol also gave us a bit of the background of artist and sitter.  These readings gave members an insight into the artist’s thought processes and the reasons for their choice of the person to portray.

Carol showed us the portrait of Barry Humphries by Louise Hearman, which was the winner of the major Archibald Portrait Prize.

The striking face of ‘Deng’ painted by Nick Stathopoulos won the People’s Choice Award.  The Prestigious Packing Room Prize was won by artist Betina Fauvel-Ogden for her painting of George Calombaris.

Carol then showed the many portraits which gained a place as finalists for The Archibald Portrait Prize in recent years.

The Archibald Prize is regarded as the most important portraiture prize in Australia. It was first awarded in 1921 after the receipt of a bequest from J.F. Archibald, the editor of the Bulletin who died in 1919. It is administered by the trustees of the Art Gallery of New South Wales and awarded for the “the best portrait, preferentially of some man or woman distinguished in Art, Letters, Science or Politics, painted by an artist resident in Australia during the twelve months preceding the date fixed by the trustees for sending in pictures. “Guido Belgiorno-Nettis said that judging the annual competitions was “absolutely the most fun thing you can do as a trustee.” The Archibald prize is awarded annually and as of July 2015, the prize is AU$100,000.

The prize has historically attracted a good deal of controversy and several court cases; the most famous was in 1943 when William Dobell’s winning painting of Joshua Smith was challenged because of claims it was a caricature rather than a portrait.

The Archibald is one of the few art prizes in which the artist’s signature is covered up so as not to be seen by the judges during initial selection for the final. Given the small size of Australia’s art community, this is intended to discourage nepotism on the part of judges simply selecting their friends works’ rather than making selections based on merit.

Max Meldrum criticised the Archibald Prize winner in 1938, saying that women could not be expected to paint as well as men. Nora Heysen was the first woman to win the Archibald Prize, with a portrait of Madame Elink Schuurman, the wife of the Consul General of the Netherlands.

In 1953 several art students including John Olsen protested William Dargie’s winning portrait, the seventh time he had been awarded the prize. One protester tied a sign around her dog which said “Winner Archibald Prize – William Doggie.” Dargie went on to win the prize again in 1956.

In 2002, head packer Steve Peters singled out a painting of himself by Dave Machin as a possible winner for the Packing Room Prize. It did not win, but it was hung outside the Archibald exhibition. Following this, portraits of the head packer were no longer allowed.

The Archibald is held at the same time as the Sir John Sulman Prize, the Wynne Prize, the Mortimore Prize for Realism, the recent Australian Photographic Portrait Prize and was held with the Dobell Prize before 2003. The Archibald prize is the next richest portrait prize in Australia, after the Doug Moran National Portrait Prize. However, the Archibald is the only artist’s prize that receives much attention in the general press. Part of the reason is probably that many of the paintings feature prominent Australians, such as actors, sportspeople, and politicians, and thus making the art more accessible than other genres. It is also longer running with a richer tradition than the newer established portrait prizes.

In 1978 Brett Whitely won the Archibald, Wynne and Sulman Prizes all in the same year, the only time this has happened. It was his second win for the Archibald and the other prizes as well. 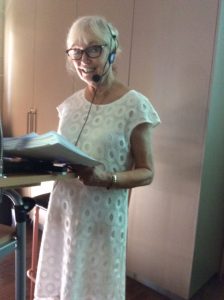