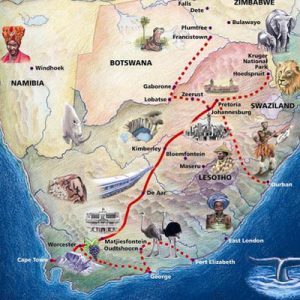 New presenters Carol and Bob Simpkins gave a stunning presentation on their travels in various African countries, mostly travelling very basically, but with very impressive photos. On their first trip in 1986 they hired a car in Kenya, then travelled by train from Nairobi to Mombasa. Carol showed wonderful camp, wildlife and scenic photos to go with her descriptive dialogue – the Rift Valley, Masai Mara, the Serengeti (during the migration of 2 million wildebeest), Ngorongoro Crater, Olduvai Gorge, and their climb of Mt. Kilimanjaro. A video clip showed them paddling and overturning on a rubber raft on grade 4 and 5 rapids on the White Nile where it exits Lake Victoria in Uganda only two years ago! The spectacular Okavango Delta was declared the 1,000th site on the World Heritage List in 2014 in the hope that it will be preserved in its present state. The many wild animals they saw and described was wonderful. (Having recently been to several of these areas myself I concur about the spectacular sights to be seen, though I did mine in luxury.) Carol and Bob finished in luxury on the Blue train from Johannesburg to Cape Town – which she considers the most beautiful City in the World – but she might be a bit biased!

Bob then continued with their visit to Rwanda. Bob gave us a history of this Central African country with the Tutsis and Hutus, and after the President’s plane was shot down in 1994 the world was not very interested in the genocide. He explained that the female PM was killed but her five children and many, many more were saved by Captain Mbaye who should be acknowledged as the country’s hero. Today Rwanda is one of the safest countries to visit – the Singapore of Africa – with a very modern clean capital of Kigali meaning ‘Land of a thousand Hills’ with no Tutsis or Hutus, just Rwandans. Visiting the Genocide Memorial Museum and the chimpanzees first, the highlight was going to the ‘Gorillas in the Mist’ in the Volcanoes National Park. There are only 10 families of gorillas on the mountain, and each family can only have eight people a day visit them, at a cost of $US 750 pp for one hour viewing, Bob and Carol walked, slid and stumbled on a hard slog for two hours to see them, but every minute was worth it, together with the videos they showed us.

Thank you Bob and Carol for the many hours I know you put in to perfect this presentation. We await your next one in May on your visit to Laos. 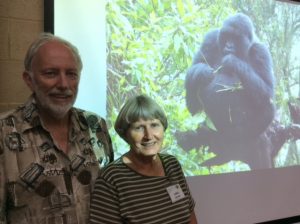