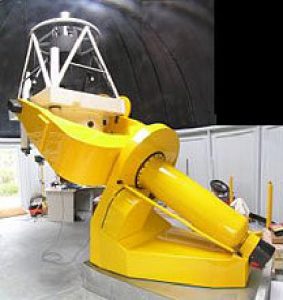 The ZADKO telescope, courtesy of Tripadvisor

John Moore, from UWA, gave us a very interesting talk about how his department works and the relationship between the department and the research physicists in the School of Physics.  His enthusiasm was evident, as he described how he enjoyed going to work each day, as there was always something new happening.

We heard about the Zadko telescope, obtained with a $1.6m donation, and located at Gingin, at the Gravity Discovery Centre, where it is housed in a purpose-built observatory, specially designed for it by John Moore. The Zadko telescope has enabled UWA to collaborate with other international astronomy partners, searching the night sky for asteroids and “black holes”.

Furthermore, UWA has a very worthwhile reciprocal relationship with Rio Tinto, who have donate millions of dollars to the School of Physics, thus enabling them to install a camera on the Zadko telescope, among other things.  John explained how the government required tertiary institutions to get funds from industry, before they would contribute.

John described how UWA produced its own liquid helium, as they require a large and constant supply of it. Helium exists naturally as a gas and can only exist as a liquid at about 4° Kelvin, or 269°C.  He explained how unused helium liquid is cleaned and returned to the production, so that very little is wasted.

One idea we came away with was that there is very little chance of obtaining the tools and equipment required by the UWA research physicists on the open market, and that therefore their equipment must be built “on the premises” by John Moore and his department.
This is made easier these days by the use of 3D computer software used by the physicists to produce much more accurate models of their requirements, than the pieces of paper John and his staff used to have to decipher!  Furthermore physics PhD students have to take a mandatory course in making a piece of equipment, so that by the time they are researchers, they know what is involved.  The students have their own workshop for this purpose.